Hospitals continually publicize their levels of quality and safety, but there is still a steady increase in occurrences and fatalities due to infections transmitted within their four walls. In an industry where hospitals can work around punitive measures for their lack of prevention, the true burden of all hospital acquired infections really lies on those paying the final bill, health insurers.

Hospital acquired infections (HAIs) range between $28 billion and $45 billion in annual direct hospital costs in the US alone.[i]  But how much did HAIs cost health insurers (insurers), including Centers for Medicare and Medicaid Services (CMS)? Surprisingly, nobody can really say anything, except that it is certainly in excess of the hospital financial impact from direct costs and the penalties being applied.

Infections that are acquired in hospitals or healthcare facilities result in patients with significant post-discharge insurance claims related to medications, primary care follow-up, lab work, rehab and homecare.[ii] In some cases, this is drawn out over the course of years, depending on the infection, severity and patient health status. Therefore, insurers have a real and compelling financial incentive to make investments and drive improvement in hospital safety, focused on the serious and grave problem of HAIs.

There have been years of research and countless quality initiatives developed by insurers and hospitals around the United States with no conclusive evidence suggesting interventions lead to improvements in infection prevention. These recent conclusions were reached by the Government Accounting Office (GAO) and leading third party experts such as The Leapfrog Group, and support the claim that very few of these programs were successful.[iii][iv] In fact, properly reported HAIs are listed among the most prevalent sources of hospital discharges, accounting for nearly two million discharges per year.[v]

In 2008 Medicare stopped reimbursing hospitals for certain hospital-acquired outcomes. These changes deny payment for select conditions occurring during the hospital stay and are not present on admission, including some healthcare-associated infections.[vi] The idea was to hit careless hospitals where it hurt and give them a financial incentive to improve their standards and behaviors. This approach was adopted, over time, by private insurers, reflected in various Performance Improvement Plan (PIP) initiatives tied to financial awards given to the hospital for success.[vii]

While financial penalties suggest a strong economic incentive for hospitals, it is important to note that an interrupted time series analysis of the impact of CMS penalties on infection rates over the first four years of CMS penalties found no significant effect of penalties on reduction of HAIs.[viii] Additionally, Stanford University recently reported new evidence that demonstrates penalties have had a significant effect on hospital up-coding for reimbursement, and therefore have increased the direct cost of hospital coverage, with very little effect on actual infection rates.[ix] Up-coding is the practice of upgrading the seriousness of a medical malady and treatment by entering the Diagnosis Related Group (DRG) code that will carry the highest reimbursement. This study, released in March 2016, offers an insightful explanation. “Instead of spurring tighter standards of care, the penalties are prompting hospitals to simply ’up-code’ their records and claim that patients were already infected at the time they were admitted,” which is a likely driver in the declining infection case reporting.[x]

These findings, in some ways counter-intuitive, suggest that preventing many HAIs may be far more difficult for hospitals to accomplish than by incentive alone, or that hospitals are avoiding the intended goal of reducing infections by placing the financial burden on the insurers. Both possibilities imply a pressing need for innovative, evidence-based and faster approaches to drive new prevention strategies.

Insurers, who currently incentivize hospital improvement initiatives and who would directly benefit financially, are therefore uniquely placed to seriously drive these strategies.

Infonaut has worked with medical insurers to estimate that inpatient stays could account for anywhere between 60% and 80% of a member’s claims expenses on an annual basis.  The remaining 20% to 40% are incurred outside of a hospital setting in places such as primary care offices, labs, pharmacies, or any other types of specialist settings.

A pilot study over a two-year period at a hospital in New York state, allowed us to develop an initial estimate of the growing costs of HAIs to insurers, with the goal of sparking future investment and discovery in the area of HAI post discharge cost.[xi]

Below are the high-level financial results from the pilot hospital’s ICU and Step-down Unit.  The baseline cost is the three-year period leading up to the pilot. The example includes the cost related to all cases that went through those units, regardless of admission or discharge location.  It is important to note that the pilot study results are limited by the length of the study period, the lack of available information on other safety initiatives in the hospital and that the pilot was not designed to be a clinical trial with a control population. There are currently several follow on study opportunities that are being explored to provide further validation.

Hospitals have historically coded to increase the severity weight of cases with HAIs in order to cover expenses.  This “up-coding” creates a higher reimbursement amount than would normally be constituted by the original admission diagnosis.  Carving out the average severity weight increase of roughly 35%[xii] of the hospital savings will show the Insurer’s portion of inpatient savings.  When you add the hospital portion to the estimated post discharge expenses (conservatively at 20%), the insurer’s burden could have been lowered by up to $1 million dollars by reducing the number of observed HAIs in two units, in one hospital.

A significant reduction in infections revealed a correlated Return on Investment (ROI) in excess of 700%. This demonstrates small investments in a widespread and costly problem could generate significant ROI.

If you were to extrapolate this example across the nation where one in every twenty-five hospital visits (4%)[xiii] results in an infection being acquired, according to coding, the results begin to approach billions of dollars in claims savings every year.  A very conservative estimate can be established using the chart below showing the average hospital based cost per HAI as calculated by the CDC and JAMA. 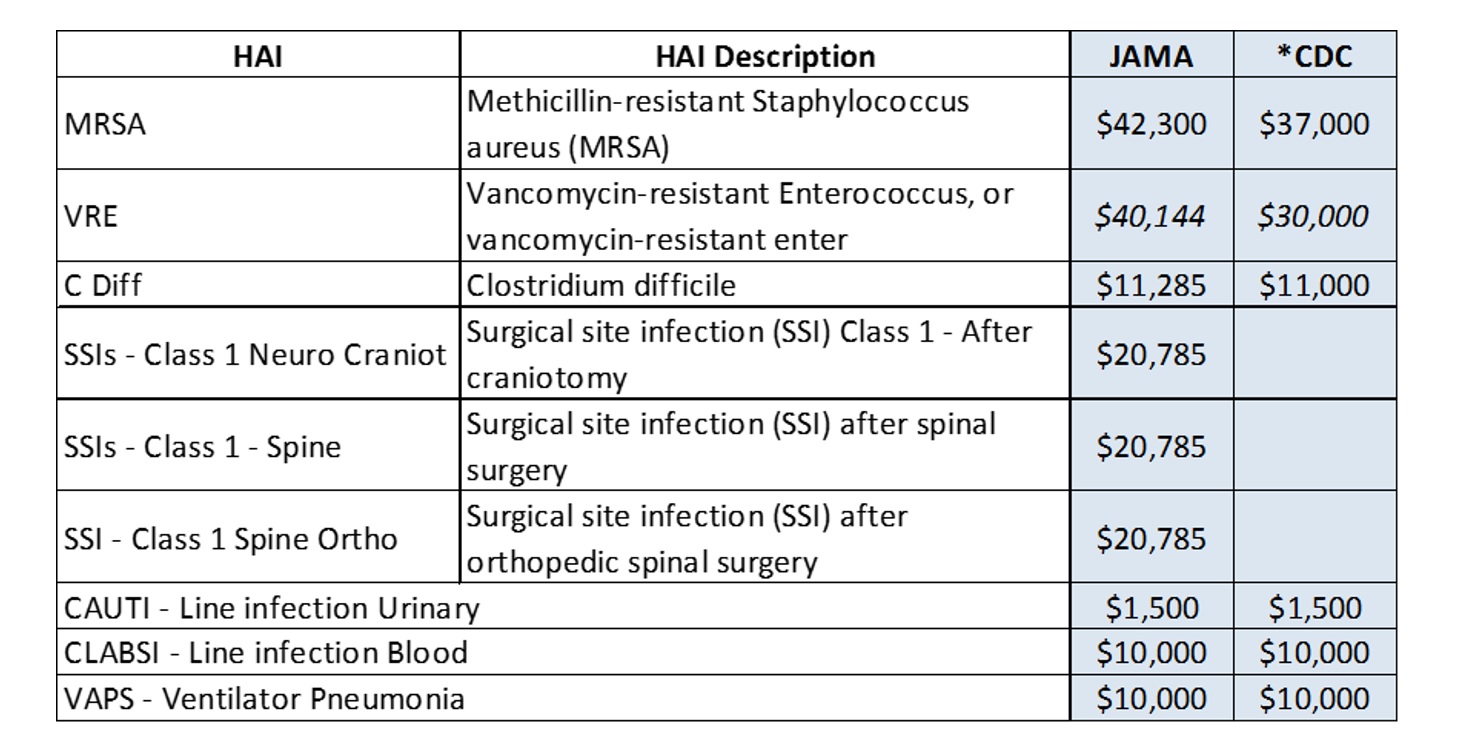 If hospitals were to reduce a single instance of infection, the weighted average hospital cost reduction would be roughly $15,000.  Using the same formulas as the above example, this would create a claims expense savings for insurers of about $9,000 per HAI prevented.

Therefore, if every hospital in the US were to reduce only a single infection per year insurers would conservatively see a $52 million reduction in claims expense.  If HAIs were lowered by a mere 5%, the claims expense reduction increases to almost $325 million.

Insurers have increasingly adopted financial incentive programs to drive hospital improvement in quality and safety. There are two common (sometimes interchangeable) terms used for these programs, that reflect the growing trend of rewarding healthcare providers for increased quality and safety, as it relates to infections.

Pay for Performance in healthcare gives financial incentives for better health outcomes. Clinical outcomes, such as longer survival, are too difficult to measure, so pay for performance systems usually measure process outcomes. Also known as “P4P” or “value-based purchasing,” this payment model rewards hospitals and other healthcare providers for meeting certain performance measures and penalizes caregivers for poor outcomes, medical errors, or increased costs.[xiv]  Unfortunately, many of the identified process outcomes that can be rewarded are ineffective in producing better patient outcomes (i.e. staff hand hygiene compliance), or are poorly executed or are not sustainable beyond the focus of the intervention.[xv]

Shared Savings is a more common term among insurers and Accountable Care Organizations (ACOs). Shared Savings Program reward ACOs and healthcare providers that lower their growth in health care costs while meeting performance standards on quality of care.[xvi] However, the Stanford study demonstrates the risk of up-coding and data manipulation to shared savings tied to performance standards – at least in how they are applied to infection prevention and control.

The US Government and Accountability Office (GAO) reported in February 2016 that CMS and some private insurers have adopted pay-for-performance programs that provide financial incentives for hospitals based generally on improving the quality of their care, which include measures of adverse events. This includes some that have nonfinancial programs that provide technical assistance and other nonfinancial support to help hospitals improve patient safety.[xvii]

According to CMS officials, the agency spent approximately $461 million on the 3-year Partnership for Patients program between 2011 and 2014, and established program goals of reducing certain preventable adverse events—including Central Line-associated Blood Stream Infection (CLABSI), Catheter-Associated Urinary Tract Infections (CAUTI), and Vancomycin-Resistant Enterococci (VRE) —by 40 percent and reducing hospital readmissions by 20 percent.[xviii]  While the agency’s expense of $461M is probably accurate, the program outcomes as they relate to the goals should certainly be called into question with greater scrutiny to validate the data and claimed results.

Current practices and improvement initiatives, be they rewarded financially or otherwise, seem to have had little impact or effect. In fact, careful study of many best practices, such as staff hand hygiene compliance, suggests they are not evidence-based at all.[xix]

Leah Binder, President and CEO of the Leapfrog group summarizes the challenge of HAI prevention and control, based partly on the GAO findings, and partly on the company’s years of HAI and safety measurement as follows:

Binder’s third point really hits the nail on the head. Even if the hospital can find the problem(s) and match an evidence-based solution, it is unlikely they will have any effect because of poor adoption, if at all. Most executives, regardless of industry, will agree that culture eats strategy for lunch. Despite the best planning and implementation of patient safety interventions in hospitals, quality improvement initiatives frequently fail or fall short of internal targets. Organizational resistance to change is a well understood phenomenon, but one that is poorly applied to healthcare.

If insurers are intent on driving change in hospitals for their own financial benefit, there has to be consideration of changing attitudes and culture within a hospital as part of any Pay-for-Performance / Shared-Savings Programs. This requires attention and investments that ultimately drive real, persistent and sustainable improvement.

Conclusions / The Opportunity for Insurers

It is paramount for insurers to properly understand their financial burden from HAIs so they are better prepared to understand their baseline costs and the potential impacts of the interventions and innovations they can drive. Patient cohorts can be isolated based on those who acquired an infection while in a healthcare/hospital setting (HAI cohort) and comparing them to their general population (regular cohort). By comparing the cost per member per month ($PMPM) between the two cohorts for a period of 3 years post-discharge, the increased cost to the insurer can be established. You may also be able to track the resulting premium increases to the patient.

Going forward, payers can adopt the $PMPM as an outcome, as part of a Hospital Pay-for-Performance program(s). The measurable success metric moves from unsubstantiated process improvement outcomes to a real patient improvement outcome: the reduction in infection cases/rates. Adoption of the $PMPM outcome model will ensure that the programs are focused on a real measure that is the result of better patient outcomes.

If insurers are intent on driving change in hospitals so they benefit financially, there has to be consideration of changing attitudes and culture within a hospital as part of any Pay-for-Performance / Shared Savings Program.